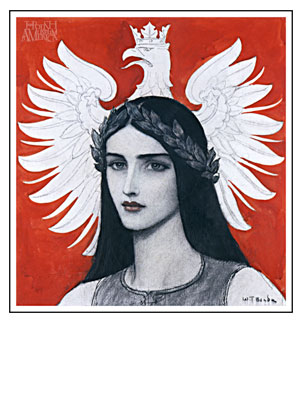 2018 marks the 100th Anniversary of the end of World War I and the Centennial of Poland’s regained independence. The exhibit Polonia Goes to War examines the actions of Polonian organizations and Polish Army recruits from the early 1900s through 1923. Uniforms, posters, drawings, photographs, documents, and a rare film footage will shine the light on this chapter of Polish American history.

Poles in America had dreamed of an independent homeland long before the war. Paramilitary groups proposed creating an army among immigrants. This idea became a reality during World War I. In April 1917, the United States declared war against Germany, and two months later French President Raymond Poincaré signed a decree creating the Polish Army in France. The American government agreed to permit Poles without American citizenship and those under the age 21 and over 31 to enlist. All others were liable for conscription into the U.S. Armed Forces. Recruitment started in October 1917, drawing in over 38 000 volunteers. At the same time over 300,000 Polish American citizens were drafted into the American Army and fought with the freedom of their native country in mind.

In addition to military achievements, one of the greatest war efforts of Polonia was its massive fundraising campaign, raising over $100 million for war relief programs. Their actions were aided by world-famous pianist, philanthropist and influential statesman Ignacy Jan Paderewski. U.S. President Woodrow Wilson recognized Paderewski as the official representative of Poles in America and demanded an independent Poland as one of America’s conditions for a peace treaty.

On November 11, 1918, the independence of Poland was proclaimed. However, it was not the end of the journey for the Polish Army volunteers, as they traveled to Poland to reinforce the newly regained freedom while Polonia continued to raise funds to help reconstruct the new nation ravaged by war and revolution.

* Polonia – people of Polish descent living outside Poland, in this case specifically in North America

Your ticket for: Polonia Goes to War: 100 Years of Poland’s Independence!