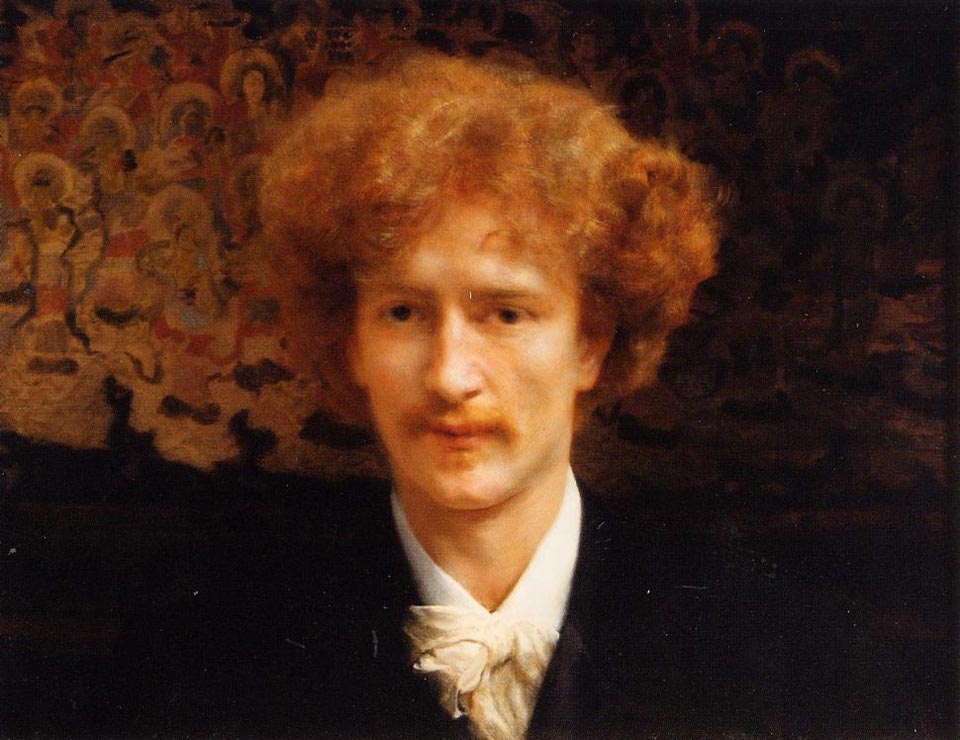 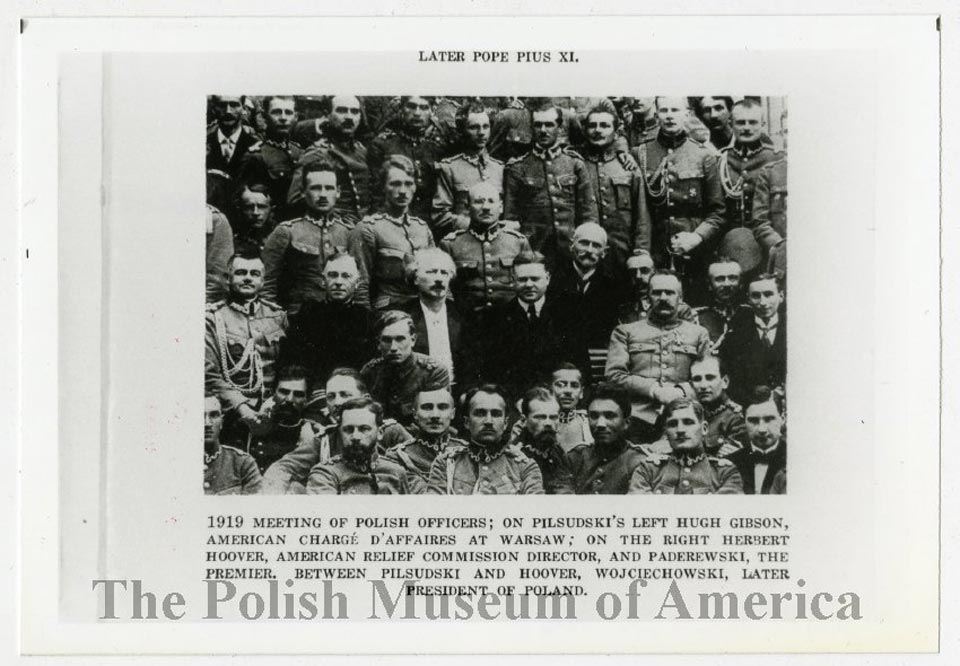 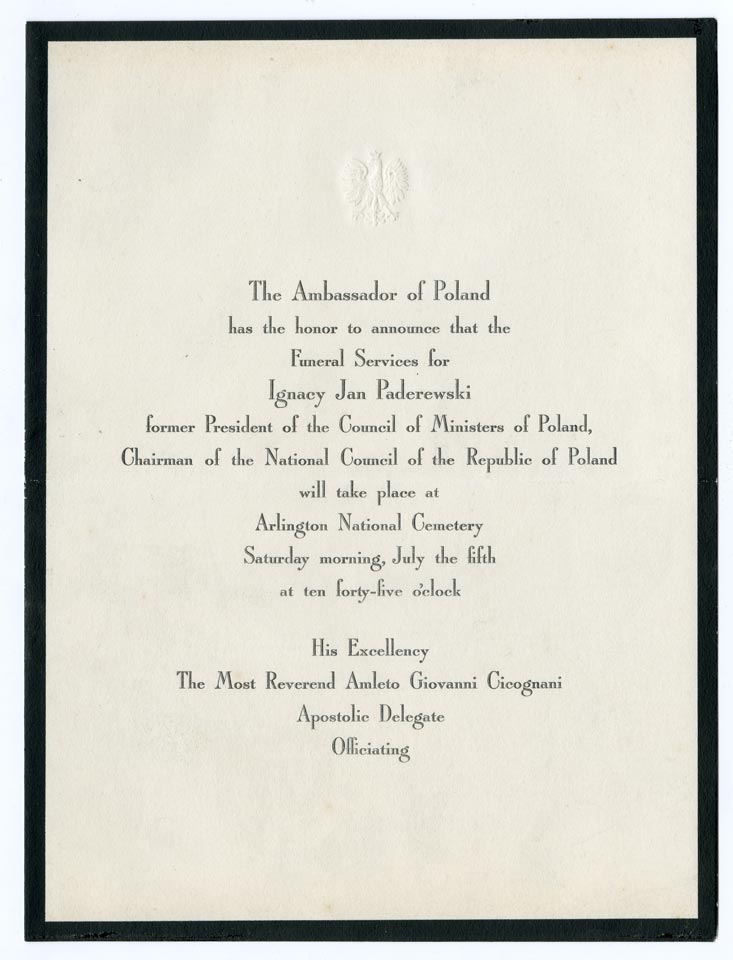 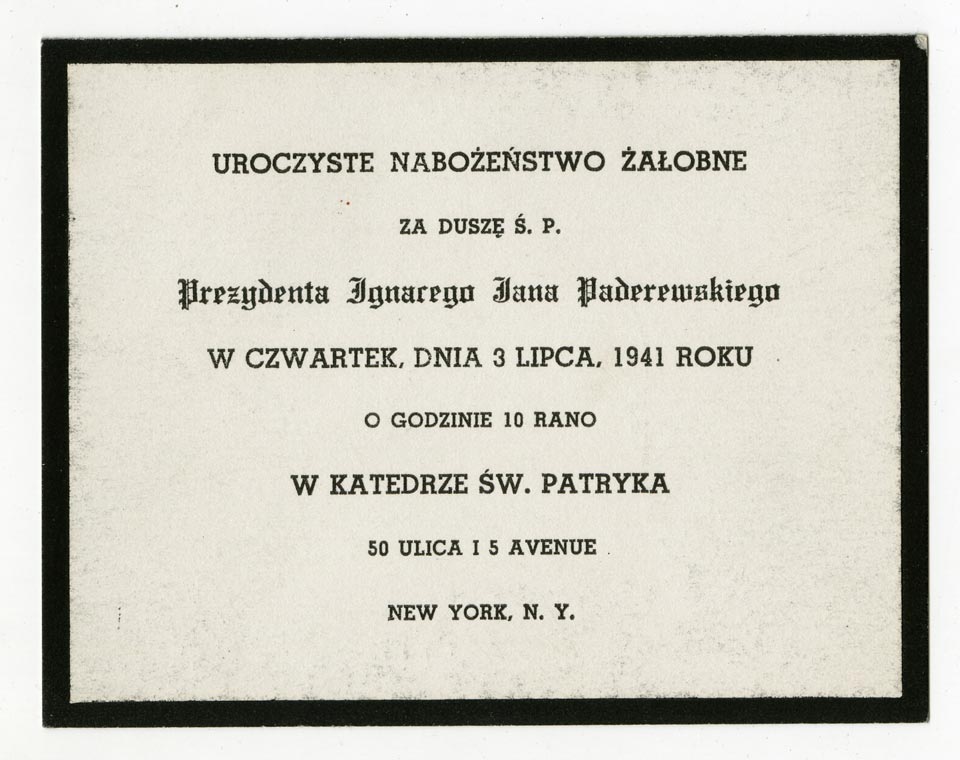 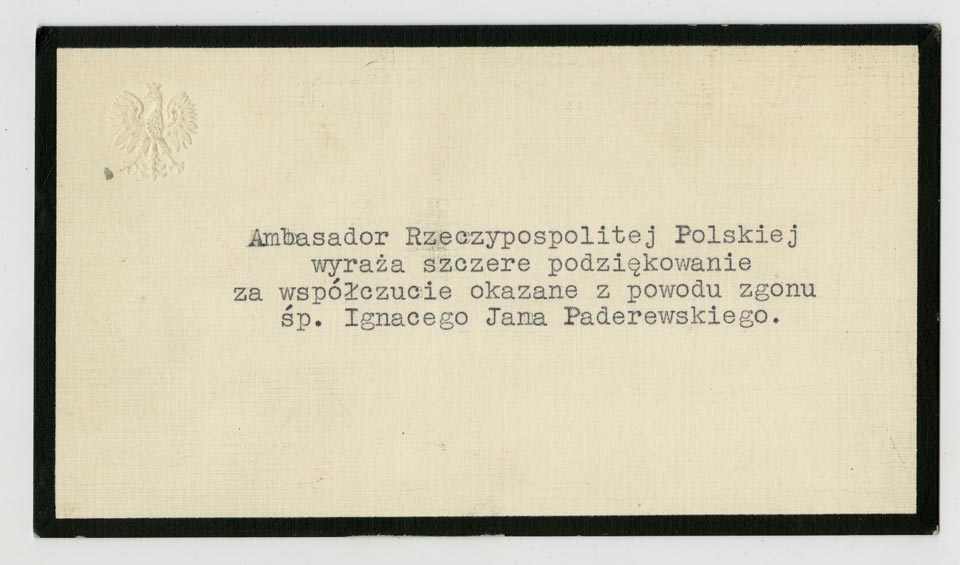 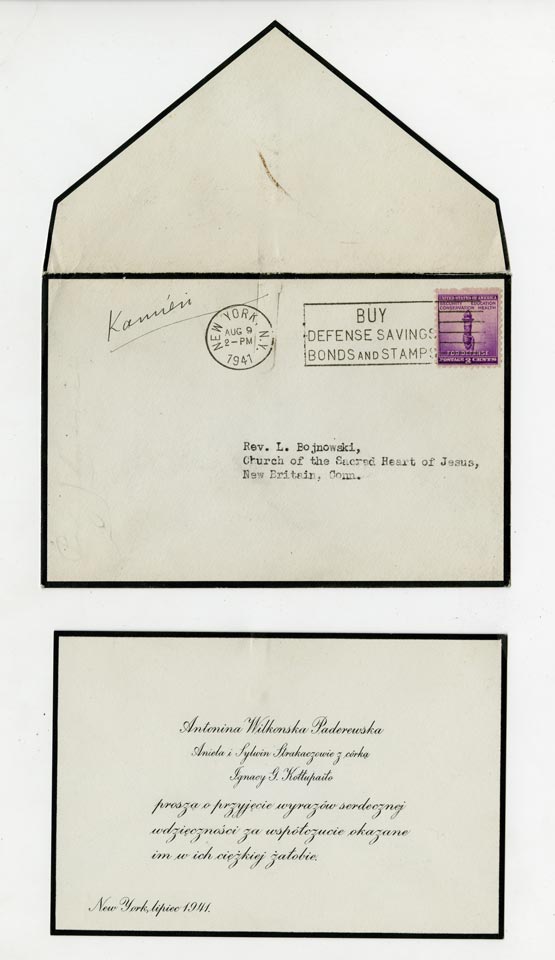 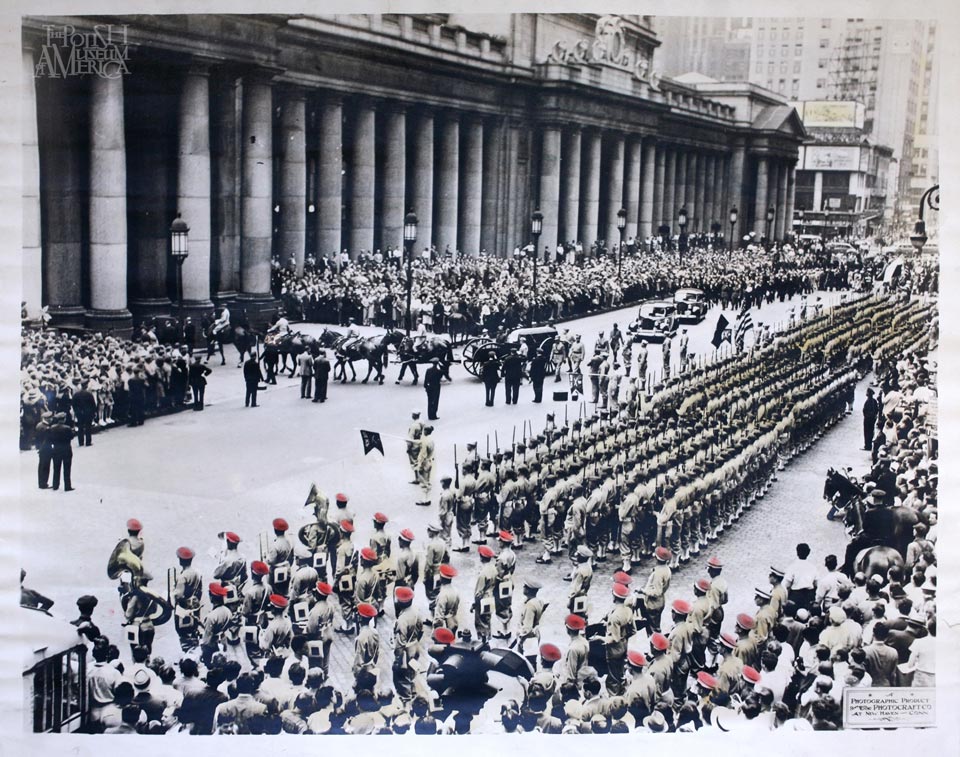 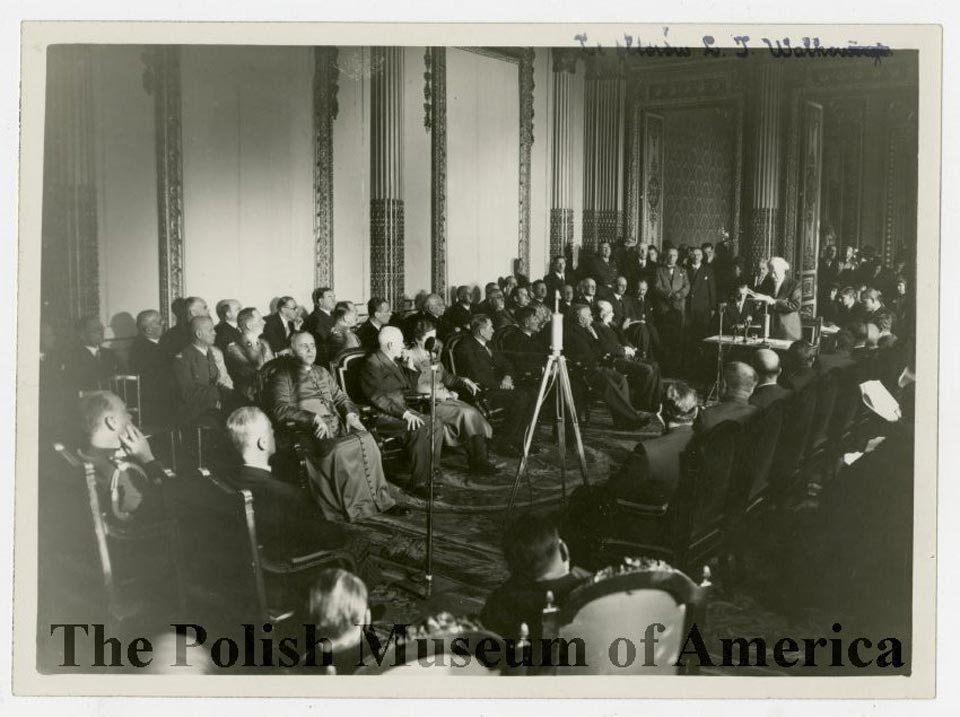 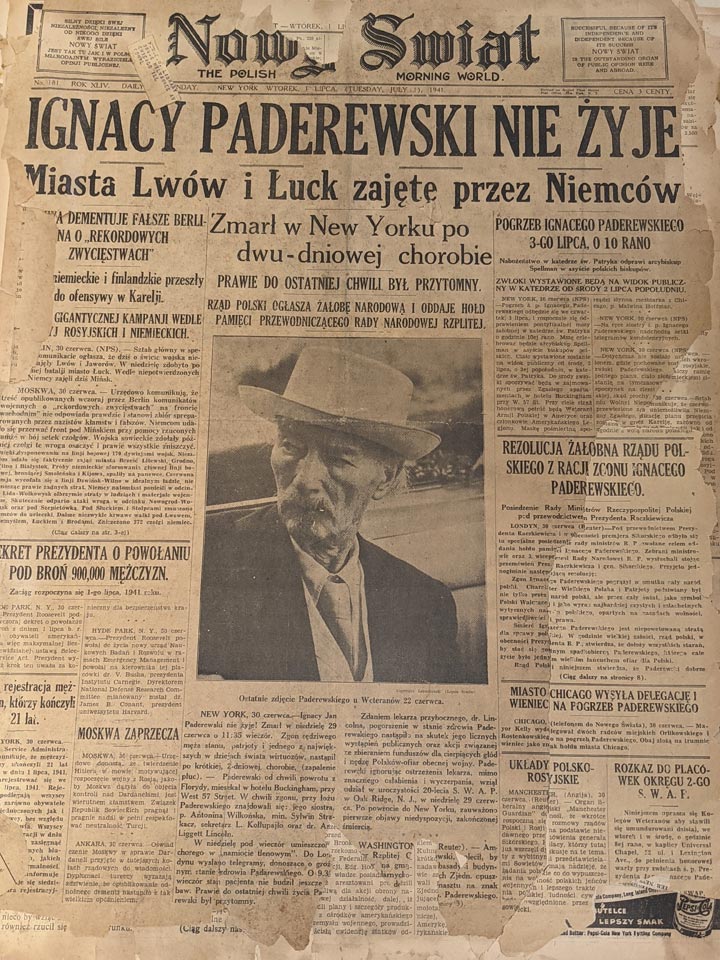 June 29 we proudly and warmly remember Ignacy Jan Paderewski who died in New York 80 years ago today in 1941.

This genius, composer and pianist turned statesman and philanthropist was born Nov. 18, 1860 in Kurylowka, Podolya region of Poland. He lost his mother soon after birth and his father Jan Paderewski was arrested for his involvement in the Polish January 1863 Uprising against Russian occupation of Poland. Raised by his aunt, Paderewski went on to study music at the Warsaw Conservatory and married a fellow student Antonina Korsakowna, who died several weeks after their son Alfred was born. While his relatives took care of his son, Ignacy Jan Paderewski continued music composition studies with Friedrich Kiel and Heinrich Urban in Berlin. In 1884 Polish superstar actress Helena Modrzejewska helped start up Paderewski's career and in 1887 Paderewski made his concert debut in Vienna, appearing shortly after in Paris and London. In 1891 he hit American shores and would end up performing 30 tours in the next 5 years, playing in every American State. Paderewski wrote the lyric drama Manru - still the only opera written by a Polish composer played at Metropolitan Opera of New York in its 135 year history. His charismatic star quality and extravagant manner were unmatched and attracted not only music lovers, but heads of state. In 1896 Paderewski donated 10,000 dollars to est. a trust fund for the encouragement of American born composers. He funded American musicians at Stanford Univ., he sponsored students at the Parisian Conservatory (1909), at the Moscow and Petersburg Conservatories in Russia. Monuments established by Paderewski incl. Debussy in Paris, Liszt in Weimar, Beethoven in Bonn, Chopin in Zelazowa Wola, Kosciuszko in Chicago, and the Washington Arch in New York. He married Helena Paderewska (his second wife) in 1899 and in 1904 toured New Zealand and Australia. His great works for piano and orchestra include Polish Fantasy on Original Themes, Piano Concerto in A-Minor and Polonia symphony. Paderewski's most renowned Piano miniature is the Minuet in G-Major Opus 14 and he left us over 70 orchestral, instrumental and vocal compositions. In 1914 Paderewski bought 2000 acres of land near Paso Robles, California. During WWI -Ignacy Jan Paderewski becomes an active member of the Polish National Committee in Paris, soon accredited by the Triple Entente as the representation of the Polish nation. Paderewski prepared a memorandum on the issue of the restitution of Polish Independence (Poland had been occupied and partitioned by Germany, Austria and Russia since 1795) for President Woodrow Wilson on the eve of America's entry into WWI (in January of 1917). The establishment of a "New Poland" became Wilson's Thirteenth Point of his famous "Fourteen Points". In 1919 Jozef Pilsudski, Poland's Chief of State appointed Paderewski Poland's PM and Foreign Minister. Representing Poland at the Versailles Peace conference, Ignacy Jan Paderewski signed the Versailles Treaty which confirmed the regaining of sovereignty by Poland. He was also instrumental by his Dec. 1918 visit, to inspire the people of Poznan, Poland, as they launched their victorious 1918/1919 Greater Poland Uprising. And much of his fortune supported the newly forming Polish military, WWI veterans and their families. In 1922, Paderewski retired from politics and enjoyed immense success in New York (opening at Madison Square Garden and Carnegie Hall), but also concerting for Americans at large, in towns and cities across the country, arriving in his custom made train car along with his Steinway piano. In the 1937 British released film "Moonlight Sonata", shown in the US. (1943) as the "The Charmer", Maestro Paderewski was spotlighted as a brilliant renaissance man. During the outbreak and horror of joint 1939 Hitler/Stalin invasion into Poland, this remarkable Polish-American hero was a source of hope and strength to the Polish people. On June 29, 1941 when Maestro died, New York and America gave him a royal farewell. On July 3 there was a funeral at St. Patrick Cathedral in NYC. Paderewski was buried at Arlington National Cemetery in Virginia on July 5, 1941.

His remains were moved in 1992 to Poland where he was laid to rest in the Warsaw Arch-Cathedral of St. John the Baptist. His heart is interred at Our Lady of Czestochowa Shrine at Doylestown, PA. The now open PMA welcomes You to be amazed at our own Paderewski Room where, among other treasures, the original quill pen used by Paderewski to sign Poland back onto the map of Europe is on display! 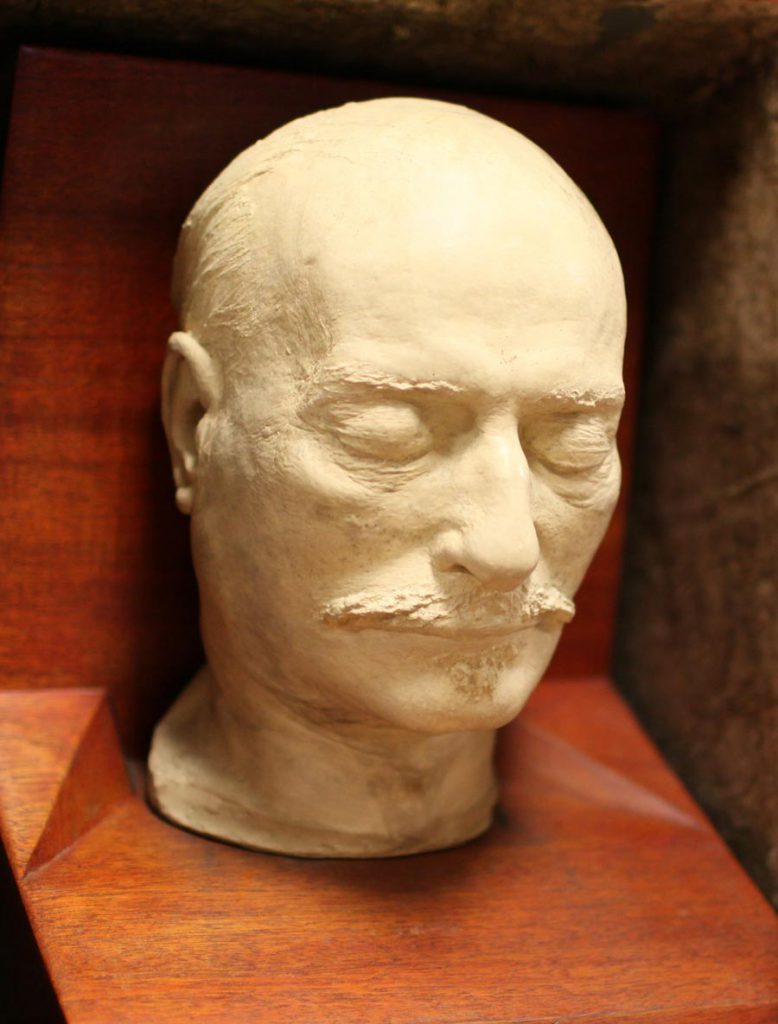 Your ticket for: Ignacy Jan Paderewski 80 Commemoration of death