May 30, 2022
No comments yet
Anniversary, News release 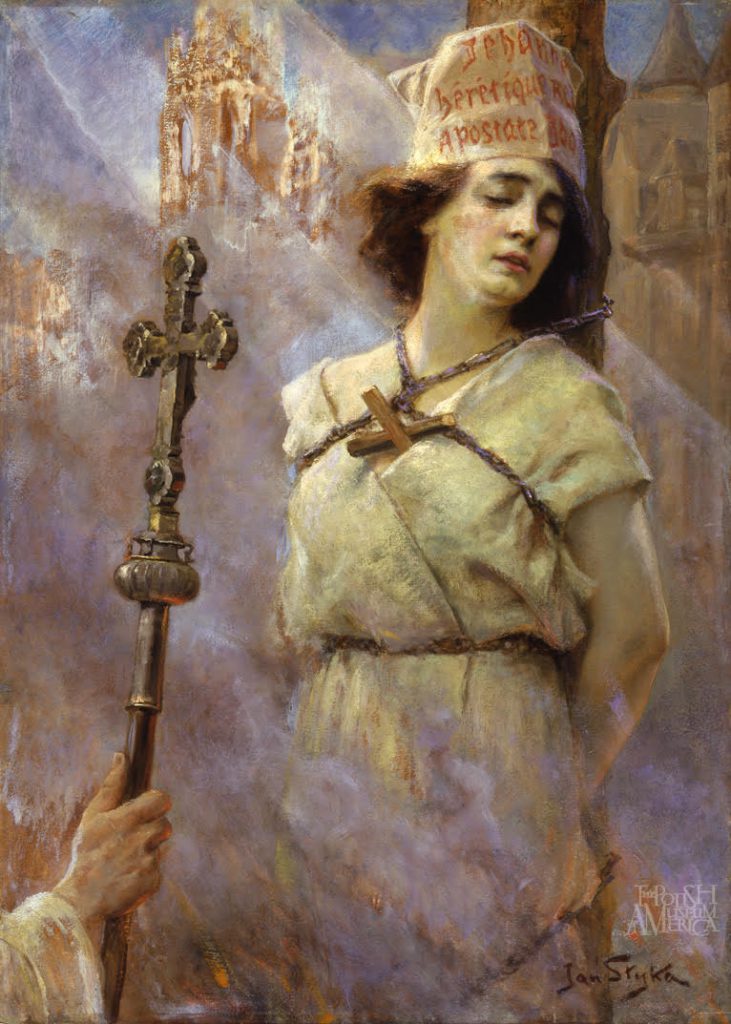 May 30 is the Feast Day of St. Joan of Arc. Jeanne, as she is called in French, was born January 6, 1412, and martyred May 30, 1431. A national heroine and a primary Patron Saint of France, Jeanne d'Arc was instrumental in bolstering the spirit of French troops during the 100 Year War between France and England. Under her moral leadership, the French royal army broke the Siege of Orleans in just 9 days. This won Jeanne support from her opponents, suspicious French war veterans, and the public at large. Jeanne claimed that she was told by God in visions to fulfill one purpose: the victory of Catholic France over England and the coronation of Dauphin Charles the VII as King of France. Orleans' independence gave way to a chain reaction so that one by one, cities in the north of France welcomed French rule again after decades of Anglo-administration.

Captured by pro-British Burgundians in 1431, this barely 19-year-old young woman was charged with heresy and witchcraft and sentenced to die a martyr's death. Jeanne d'Arc was tied to a pillar in preparation for her execution; she requested to see a crucifix and was obliged by a soldier. Jeanne kissed the Cross and held it to her chest, burning at the stake on May 30, 1431, in Rouen, France. Jeanne's image would be rehabilitated just a few decades later, beginning with the Burgundians abandoning their alliance with the English when they signed the Treaty of Arras in 1435. The re-trial of Jeanne d'Arc began in 1455 at Notre Dame Cathedral in Paris with a formal statement of request by her mother and would come to an end on July 7, 1456, at Rouen Cathedral. Jeanne's earlier forced abjuration, execution, and its consequences were nullified. By court decree, a Cross was erected at the site of her martyrdom: today it is a top pilgrimage center attracting massive crowds of the faithful and tourists alike.
Please visit the PMA to see for yourself, up close, a masterpiece painted by Jan Styka of Jeanne d'Arc. Author of four mega panoramic works entitled Transylvania Panorama, Golgotha (The Crucifixion), Martyrdom of Christians in Nero's Circus, and Racławice Panorama, Jan Styka is Poland's undisputed virtuoso of panoramic painting. This last masterpiece, Racławice Panorama, would become synonymous with Jan Styka's work and be his opus magnum. Styka, also a Polish patriot and chronicler, was greatly inspired by Polish General and Insurrection leader Tadeusz Kosciuszko; in painting Kosciuszko, Styka outdid himself in the attention and detail he devoted to the project. Calling his command of the art of narrative brilliant would be an understatement.
Born October 8, 1858, in Lwów, Poland, Jan Styka was an outstanding orator. "L'Ame de la Pologne" ("The Soul of Poland") is a set of speeches that Jan Styka delivered to his countrymen—most of his life spanned the period we call Poland under Partitions (occupation by the Prussian, Russian, and Austrian empires). Ignacy Jan Paderewski, Polish master pianist and statesman, commissioned Jan Styka to paint a monumental work: Golgotha (The Crucifixion). Again we invite you to visit the PMA and discover our fine art masterpieces and the world's one-of-a-kind collection dedicated to Maestro Paderewski!
Beatrix Czerkawski
jan styka, joan of arc

Your ticket for: Feast Day of Joan of Arc | Jan Styka