The Polish Museum of America honors the memory of PMA member and friend, Stanley W. Lyskanowski, who passed away on August 23, 2020, at age 95.

Stanley was born near Warsaw, Poland, and his young life was transformed by the horrors of World War II, yet bittersweet luck made him a survivor. In 1940, his sister and brother were sent as forced labor to Germany; Stanley, at age 14, was too young to be sent as well. The following year, he joined the underground resistance through the Catholic church, distributing pamphlets describing German atrocities.

On September 19, 1941, at age 15, he was caught by the Gestapo and taken to Pawiak prison, where he was tortured and interrogated. From there, as prisoner number 164924, he was taken to Auschwitz, and then Mauthausen-Gusen in Austria. He worked at a quarry, hauling 50-pound rocks down steep steps. Having caught pneumonia under these harsh conditions, he was secretly allowed to rest enough so that the illness passed. On three occasions, he was to have gone to the gas chambers, but due to various circumstances – air raids or bombings, he did not. He survived, so that on May 8, 1945, on his name’s day, he and the camp were liberated.

Lyskanowski requested to be sent to Italy in September 1945 to join the Polish Army under General Anders. By chance, one of the commanding officers knew his father; Lyskanowski became this officer's chauffeur. Once disbanded, he with the troops were relocated to Great Britain. He had hoped to return to a free Poland. When it became apparent this would not be possible, Lyskanowski received a visa to immigrate to the United States, arriving via New York in 1952, and settling in Chicago. He worked hard and earned a degree in electronics, and in 1961, married his beloved Josephine. Active in Chicago’s Polonia as a member of the PMA as well as the Polish American Engineers Association – he often shared his life story, including at the PMA during the 2014 “Forbidden Art” exhibition and in a profile by the Chicago Reader.

Lyskanowski is survived by his wife Josephine of 58 years, children Lidia and Arthur, grandchildren Sofia, Katrina and Adam, nephews, nieces, and cousins in Poland. 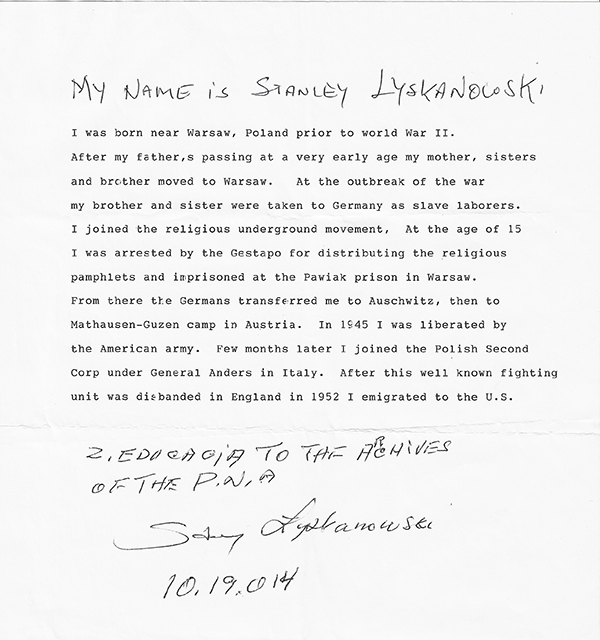 Your ticket for: Stanley W. Lyskanowski